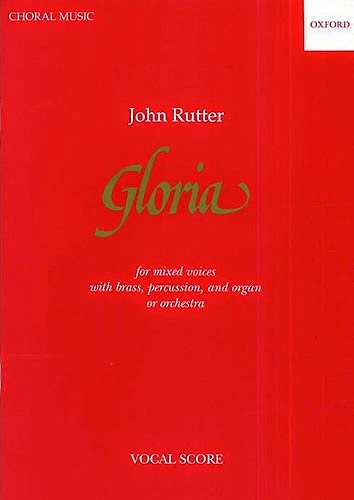 John Rutter's Gloria will be a featured selection at the Lincoln Choral Artists' "With One Step...Peace" Holiday Concert on December 21, 3pm at O'Donnell Auditorium.
Concert Info

This is a popular and well know work for Choir, Brass, Organ, and Percussion.

Below is some more great information on Rutter's Gloria which was originally premiered here in Nebraska over 40 years ago. It's exuberant energy and joyous pop influenced rhythms and harmonies are a celebration of the holiday season and our desire to share the peace of the season with the Lincoln Community. 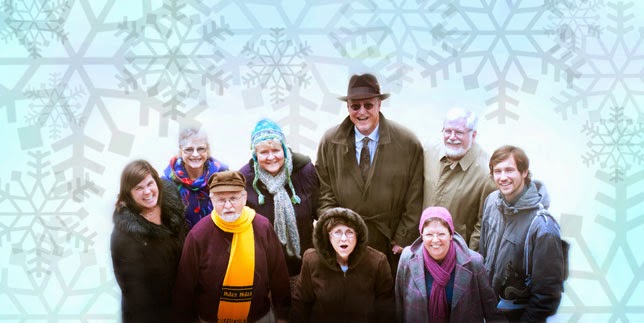 In 1974, John Rutter visited the United States at the invitation of choral musician Melvin (Mel) Olson and conducted the premiere of his cantata "Gloria" in Omaha, Nebraska, in the Witherspoon Hall of Joslyn Art Museum. The composition, commissioned by Olson's Voices of Mel Olson chorale, has become a much-performed favorite over the years.

"Gloria in excelsis Deo"
(Latin for "Glory to God in the highest") is a hymn known also as the Greater Doxology and the Angelic Hymn.
The name is often abbreviated to Gloria in Excelsis or simply Gloria.
The hymn begins with the words that the angels sang when the birth of Christ was announced to shepherds in Luke 2:14. Other verses were added very early, forming the doxology.
Rutter's music is eclectic, showing the influences of the French and English choral traditions of the early 20th century as well as of light music and American classic songwriting. Almost every choral anthem and hymn that he writes has a subsequent orchestral accompaniment in addition to the standard piano/organ accompaniment, using various different instrumentations such as strings only, strings and woodwinds or full orchestra with brass and percussion.
Despite composing and conducting much religious music, Rutter told 60 Minutes in 2003 that he was not a particularly religious man yet still deeply spiritual and inspired by the spirituality of sacred verses and prayers. The main topics considered in the 60 Minutes program, which was broadcast a week before Christmas 2003, were Rutter's popularity with choral groups in the United States, Britain and other parts of the world and his composition Mass of the Children, written after the sudden death of his son Christopher while a student at Clare College, Cambridge, where Rutter himself had studied.
In a 2009 interview, Rutter discussed his understanding of 'genius' and its unique ability to transform lives – whether that genius is communicated in the form of music or other media. He likened the purity of music to that of mathematics and connected the two with a reference to the discovery made by the early Greeks that frequencies of harmonic pitches are related by whole-number ratios.

Below is the text and it's translation as it will be performed:

Everybody in Lincoln knows Dick Morris it seems.
He is wonderful man, musician, and husband.
I have enjoyed so thoroughly working with him for the past couple of months.
He is on my mind tonight so I thought I would give you a little of his history. C. Richard (Dick) Morris, a native of Philadelphia, was a full-time church musician for more than 50 years and served a number of large churches throughout the United States. Between 1959 and 1972 he completed his B.M. Ed and M.M. at the University of Nebraska-Lincoln and served as Music Director at the Wesley Foundation on the UN-L campus, Church of the Holy Trinity Episcopal and First-Plymouth Congregational Church. In 1972 he began his work serving churches elsewhere. After retiring in 2006, he and his wife, Nancy, decided to return to her hometown, Lincoln. Dick has been an active member of the American Guild of Organists and Lincoln Organ Showcase. He is a substitute organist and choir director, has served on a number of boards in the community, has appeared frequently with Lincoln Choral Artists, and until recently was a staff accompanist at Nebraska Wesleyan University. For the past several years Dick has become a familiar face at Saint Paul as both a substitute organist and as a solo performer at two First Friday concerts. Dick and Nancy have one son, Rick, who lives with his wife, Melissa, in Seattle, Washington.
If you ever need someone to lift your spirit, Dick is the man. He loves Lincoln and beyond his own activities in music he supports the arts in Lincoln. Let's celebrate the joy he creates and gives away!
Posted by Lincoln Choral Artists, Artistic Director at 7:56 PM No comments: