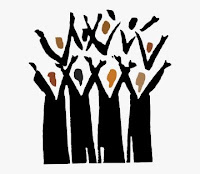 Posted by Lincoln Choral Artists, Artistic Director at 8:50 AM